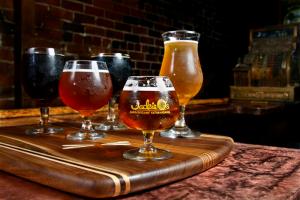 Jackie O's has some of the best beer in Athens.

As Athens’ only brewery, Jackie O’s Pub & Brewery is home to some of the best selections of handcrafted beer in Southeastern Ohio. On any given day, visitors can enjoy a pint of their favorite brew, eat some local food, catch a football game and see some live music or a comedy act.

Although the beer selection changes with the seasons, there’s always a few staples found year round. And if you aren’t sure what to get, the knowledgeable staff is there to help you decide. My personal favorite is the Razz Wheat, although I’ll take the Barking Pumpkin in the fall, which is made with pumpkins straight from local farms. There’s really too many to mention here, so for a complete list of their brews check out www.jackieos.com.

Art Oestrike is the owner, and since he first bought the bar – formerly known as O’hooley’s Irish Pub – in April 2006, he’s worked to transform it from a corner bar into a thriving restaurant, brewery, and place to see some of the best live entertainment in Athens. His latest expansion project includes moving a portion of its brewing capacity to a building off Stimson Avenue known to locals as the old “cheese barn.” The building, which was home to a cheese-making facility in the 1980s, is ideal for expansion, says Oestrike.

“We just want to do kegs, probably for the first two years, because it’s an investment in and of itself to buy the brewing equipment. And bottling requires a fairly substantial capital to acquire the equipment, so we want to make sure we’re running on our own before we make the jump to run the bottling line,” he said of future plans for the facility.

Oestrike, who noted there are a number of people looking for business accounts, estimates that one-third of what’s brewed at the facility will be sold at the restaurant.

His goal is to distribute the kegs around Southeastern Ohio, with the city of Athens being first, and expand outward. “We’ll have beer available to people in the area first, and have growth in a circular type of way. We’ll start right here and build outward. In Athens city alone, I’m pretty sure that our community will take to it pretty quickly,” he said.

“If we got 80 accounts around Ohio, we wouldn’t be able to keep up anyway,” Oestrike explained. “There are a lot of irons in the fire, so we’ll make sure they’re under control before we go further.”

A native of the east side of Cleveland, Oestrike first moved to Athens in 1994, and fell in love with the area. Aside from teaching English in Korea for three years, he’s lived here for more than a decade. Besides owning the brewery, he teaches English to international students at Ohio University.

“Athens is awesome. I don’t know if there’s any other place in Ohio like it. There are so many things going on here,” he said. “It’s a college town, and there’s not that many college towns in the country. There’s academics and you can still get out in the country and do things. There’s a lot of intellect here, and a lot of different things going on here that make it such a great place to go to college and raise a family and go to school.”

Getting out in the Athens countryside is one of the reasons Oestrike decided to buy a 20 acre farm earlier this year. One acre of the farm is dedicated to vegetable gardening, some of which ends up on customer’s dinner plates. He plans to expand the garden next summer, and just recently fenced in several acres of the farm to make it habitable for livestock.

“We make all the bread at the restaurant, and all the burger meat is local. Some of the veggies come from the farm or other producers, not as much as we’d like, but we’re using more and more all the time. We buy locally what we can,” he said.

“The more we can do, we will do; and the more we expand, the more we can do. We really want to. It’s so important to build off what’s around you, and to start your whole enterprise with people around you,” Oestrike said, explaining the brew pub’s importance in helping to create a sustainable economy. “We have to produce more things, we can’t just be the service industry. If we can’t make something and return that through the community, then we’re never going to get out of the doldrums our economy is in. Everything is made in China. The more we can support our people, the more it helps the community sustain itself.”